Another Weight Loss Success!!! Testimonial from Kim B!!!!!!

A year ago I was feeling pretty miserable. I had gained too much weight over the last few years and I felt dumpy and depressed. I was very tired and generally did not feel well. I knew I needed to start eating better and exercising but was caught in a vicious cycle and had no motivation. I rewarded and comforted myself with food and alcohol.

Soon I would be 40 and I always planned to be in good shape so I started feeling a little anxious when I realized how far from that goal I was. Looking at myself in a picture I said “Is that what I really look like!” I was horrified that I had let myself go like that. You would think that would have been enough motivation but it wasn’t. But thankfully the stars aligned and one day our friend Kim Blomberg’s husband was telling me about her success in group training and her first bikini competition and showing her photos. I was amazed how great she looked. I began to read up on figure competition training and diets and looking at a lot a before and after pictures along with success stories of real women, some of which I knew, who had amazing transformations with group training in as short as 12 weeks. My curiosity was peeked and I thought it was something I could do.  I thought “what is something I’ve never done before?...been ripped!” I had actually never seen my abs in my life and made that a personal goal and a birthday present to myself. Finally, after meeting up with my childhood friend Kim Trujillo, who was also a group training success. I realized the universe was telling me something and I signed up.

That was the best decision I had made in a long time. My body responded so well and so quickly to this program. At my highest weight I was 135. I had never been over 120 most of my life. My first recorded body fat was 28%. Within 10 weeks I had lost 20 lbs! I felt so good as if every day my body was saying thank you. After only two weeks of training I already began to see some muscles peeking out and that’s when I decided I would compete. Now six months later I have achieved my goals. I had abs for my 40th in September and was proud to stand on stage in my first figure completion November 3rd-Ripped! My final weight 109 and body fat 14%. Additionally all the aches, pains, skin conditions, bad mood, and poor sleep disappeared.

I love getting my butt kicked, I love sweating, I love lifting heavy, I love feeling sore. It’s all strangely addicting. Not a bad addiction to have. I especially love working out with my girlfriends. Group training provided the accountability and support I needed to be successful and stick with it when I might have given up or cheated badly if I was alone. Claudia is an amazing trainer. Her years of expertise guarantee results and the quality of the individual program she develops for you. Her fun loving personality guarantees the workout will be fun and full of laughter. I thank her in my heart almost daily for giving me a positive self-image and self-love, things I’ve never developed until now. It feels so good to look in the mirror and be happy with myself. 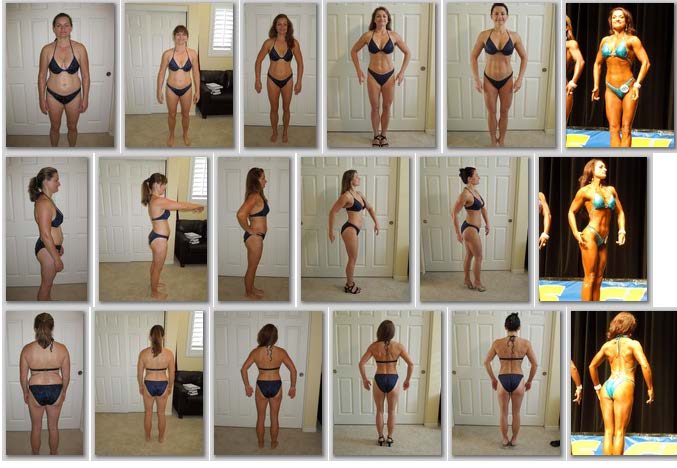